On October 14–18, 2019, the Science Working Team of BepiColombo gathered for the 19th time. One year after the launch of BepiColombo, a special History session was planned, and the celebration of the 1rst anniversary of BepiColombo in space took place in the restaurant of the ESA Scientific and Technical Center (ESTEC) in the Netherlands. The Young Scientist Working group holds its now traditional session on Monday morning, including the traditional paper reviews and some scientific presentations. Go Murakami announced that the number of YSWG members is always increasing, now reaching 92 participants! 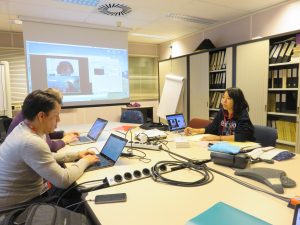 The first results of the SHOTS project were presented by Léa Griton and Sae Aizawa at the Hermean Environment Working Group. The presentation was much appreciated bu the Hermean Environment Working team. We were congratulated on several occasions during the week, notably as an example of young scientists successful and useful collaboration. The active members present at the SWT (Sae Aizawa, Jorge Amaya, Jan Deca, Léa Griton) gathered on a special session to set the draft of the first SHOTS paper. Active discussions with the other SHOTS members present (Nicolas André, Daniel Heiner, Go Murakami, and Prof. Usui) also took place on several occasions, including the social event, organized to celebrate the first anniversary of BepiColombo in space!